Diary of a Garden Plot Owner 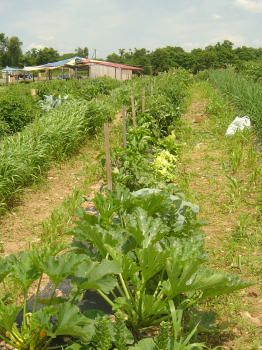 Diary of a Garden Plot Owner

May 12 – First Planting in the Garden Plot

When we arrived at the farm stand, Stephanie gave us a run-through of the wide variety of plants available to plant in the garden plot. We learned that we could choose an early variety of tomato plant and a late variety so we could have a longer interval of tomatoes being produced. There were varieties of vegetables that we had not heard of before such as the watermelon radish, “1 ball” and “8 ball” squash,  and tie-dye squash.

Next we walked out to the Garden Plot area with our chosen plants, stuck our stake in the ground to mark our plot, and made a circle around Stephanie while she demonstrated how to plant. We learned where the drip line was and where to locate the plants so they would be sure to get enough water. Using a wooden stick, we measured the distance between plants to ensure enough room for growth. The girls were thrilled to see tiny baby carrots already growing on the carrot plants. For some reason, this was one of their favorites and so many carrots were planted today! At the end we had planted spinach, squash, tomatoes, dill, strawberries, several varieties of peppers, cherry tomatoes, Japanese eggplant, orange and yellow carrots, and spring onions. We took a few ‘before’ photos and crossed our fingers in hope that the plants would survive the low temperature that was being forecast for this evening. 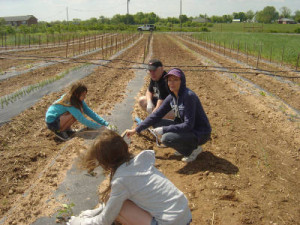 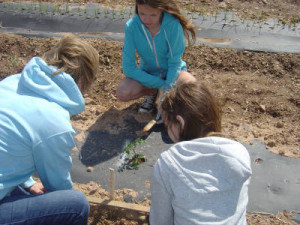 Checking on our garden plot May 26

We were passing by Brossman’s and took a few minutes to check on our plants.

Everything looked fine and the plants were a little bigger than last time.

Stephanie emailed the growers to let everyone know that they had staked and strung up everyone’s tomatoes, peppers and eggplant. She said that some of us had lettuce, spinach and cabbage ready for harvest! Garden Plot members could also pick strawberries. 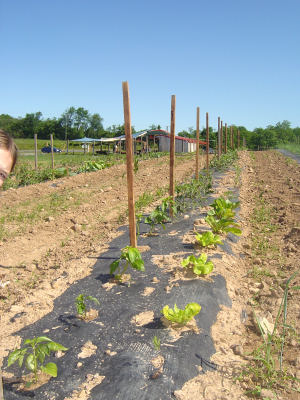 The group of growers receives emails from Stephanie. We received one today letting us know that many of us have squash, lettuce, radishes, cauliflower and broccoli ready to pick. She listed the names of some of us who needed to come pick.
It’s nice to know she is keeping an eye on our plots and nice to receive a reminder that our produce is ready.
Stephanie also let us know that when we come, our tomatoes and peppers need additional stringing and that weeding around our plants helps them grow and stay healthy. She’s happy to help with the stringing, and the best time to catch one of them during the week is during AM set up and PM close down.
Happy Gardening!

letting us know that many of us had squash, lettuce, radishes, cauliflower and broccoli ready to pick and that our tomatoes and peppers needed additional stringing. She also said that weeding around our plants would help them grow and stay healthy.

So we stopped by the stand and got the string, a wooden pole and scissors; also a couple of bags for our produce. The tomato and pepper plants had really grown. Peering deeper into the plants we saw many green tomatoes. Deer or rabbits had been nibbling at some of our lettuce plants, and there was a huge head of romaine  that we uprooted and put in our bag. Dill and parsley looked good. Our melon plants had blooms and several little melons.

After showing my daughters and their friend how to tell what was a weed and what was not a weed (onion stalks look a little like grass!), we all got to work cleaning up our plot.

We picked up our pulled weeds, full bag of lettuce, and went back to the stand. We picked out some nice red tomatoes to go with our lettuce, and the girls insisted on getting some peaches and cherries. Seconds after we were on the road, the girls were eating the cherries and tossing the seeds out the window!

From farm to table – we had a fresh salad with dinner tonight! 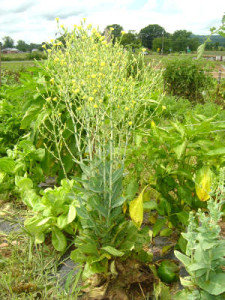 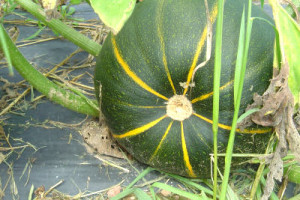 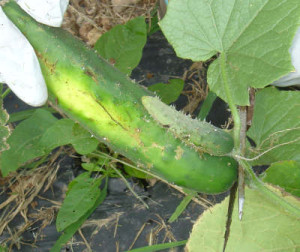 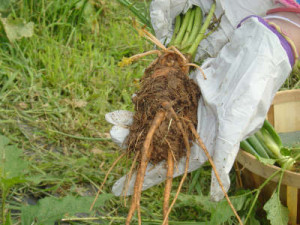 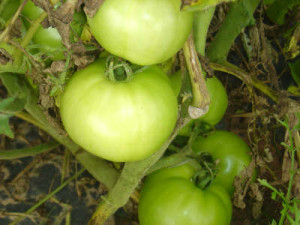 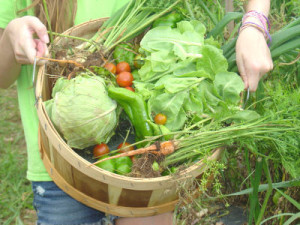 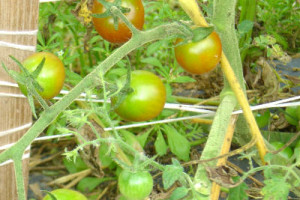 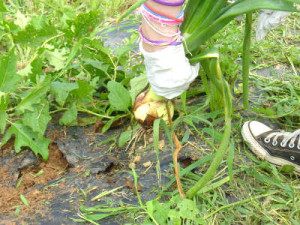 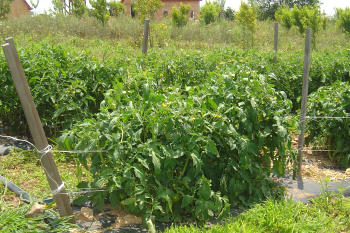 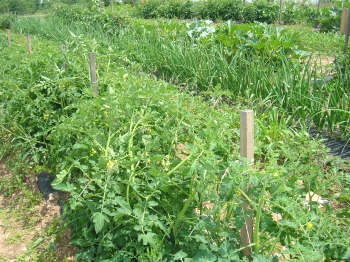 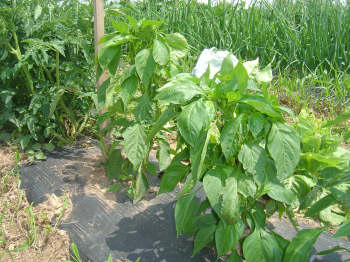 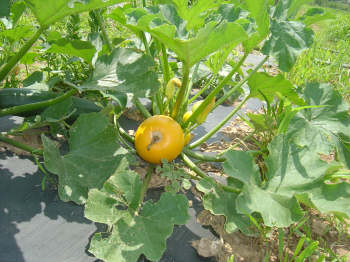 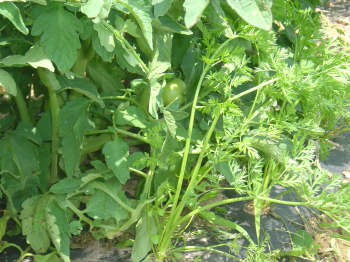 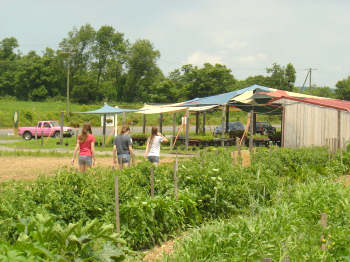 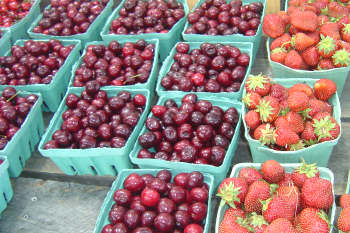 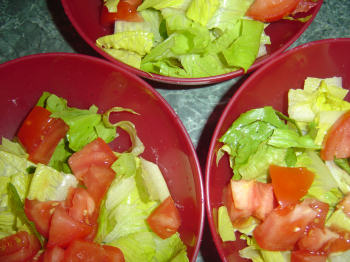 July 13 – Quite a Nice Basketful Today

We haven’t been since June and were hoping everything was fine and that the weeds hadn’t taken over. We were given a big round basket, gloves and scissors for our trip out to the garden plot.

First we pulled onions, then picked peppers. A cabbage plant was ready, so we pulled away the larger leaves and broke off the head of cabbage. Next we picked a few cucumbers (glad we had gloves since they were a little prickly). Most of the tomatoes were still green, but we got several handfuls of cherry tomatoes. My helper tasted one right there in the field! Not knowing whether it was time to pull up the carrots or not, we gave in to temptation and pulled a few. Quite interesting shapes! We saw a plant that we were not able to identify and decided to take a photo of it to show to Stephanie. Maybe it’s just a weed? We finished the picking with a nice amount of lettuce.

We had a very successful harvest with a nice variety of produce to take home in the basket. At the stand, we chose red tomatoes, green beans, peaches, cherries, apples (an early variety), and a peach pie! 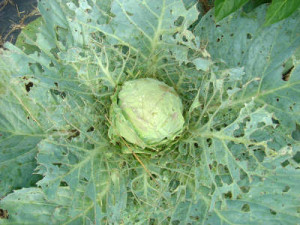 Today’s yield consisted of many cherry tomatoes and peppers. At first glance, it didn’t appear that there would be much to take home, but by the time we finished we had another full, beautiful basketful!

Stephanie happened to be in the field when we arrived. She identified the squash that we couldn’t quite figure out – turns out it was one of the eight-ball squash that we had allowed to stay on the vine for too long, so she said we could use it as a pumpkin! We asked about the carrots and how would we know when to pull them, and she said that they learned that the soil here is too rocky and so the carrots didn’t grow very well. We pulled them and tossed them into the center of the aisle.

The cherry tomatoes were looking really good, so we picked every single one except for the green ones. Same with the peppers and onions. Stephanie pointed out a large tie-dye tomato that was ready to pick and an even larger one in another grower’s plot that was still green. We had one cucumber to pick. We weeded again and tried to tie up some tomato vines so the tomatoes wouldn’t rest on the soil. Any tomatoes that had gone rotten were tossed into the center of the aisle so that they would get turned back into the soil.

Our plans for this week’s produce? Well, the cherry tomatoes make a really good snack. Just rinse and keep a bowl nearby for snacking. Or we might make a salad by mixing them with a little oil, vinegar, Italian spices and chunks of fresh mozzarella. We like to slice the big tomatoes and make a tomato sandwich with some mayonnaise. The onions will be sauteed and caramelized and mixed with cooked squash. We’re planning to stuff the peppers with a ground beef and rice mixture.

We bought some peaches and a bag of caramel corn to eat on the way home. Celebrate summer! 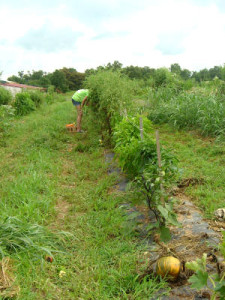 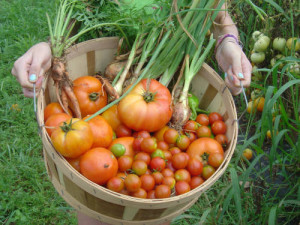 As I walked over to our plot today, I saw lots of cherry tomatoes ready to be picked. Not until I got started did I realize how many cherry tomatoes I might be taking home! I picked as many as I could find on one side, took the basket back to the stand, and then picked the other side. This was a huge amount of tomatoes!

In addition to those, I also picked more peppers, cucumbers, tomatoes, and another eight-ball squash. I had just seen Stephanie at the stand and she recommended pulling any remaining carrots since they did not grow well in this type of soil. She was impressed with the amount of cherry tomatoes and asked how many plants we had put in. Next year we may consider planting a few less of those!

Since we were about to go on vacation, I put most of the cherry tomatoes into ziploc bags and gave them to friends and neighbors. For dinner, we made a salad of sliced cherry tomatoes with a little drizzle of Caesar dressing, tiny fresh mozzarella balls (perline) and a sprinkle of shredded Parmesan. Delicious! The cherry tomatoes are so sweet!

We received an email from Stephanie today, letting us know that many of us have a lot of tomatoes, peppers and eggplant ready!

She also let us know that if we are interested in planting any fall squash she will have it available this weekend. Butternut, spaghetti, acorn; also Esmeralda lettuce and herbs available. She said that the rain and cool weather have made this a very interesting growing season!